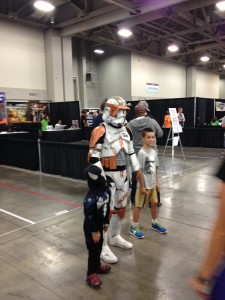 I decided to go to the 2013 Salt Lake Comic Con because of the potentially valuable lessons being offered in panels about being an author. It had nothing to do with wanting to discuss my angst earlier in the week caused by the portrayal of Frank Herbet’s world in the Dune Mini-Series…  Or my love for masterpieces like Neil Gaiman’s Sandman Series… Or my life-long affair with science fiction… I was going to learn, dammit. Parting the 40k+ strong sea of geeks taught me these lessons about attending the Con, about becoming an author of fiction, and about the community itself.

2.  There are countless benefits for creating stories in novel form first, but if you have something that must be a film, a comic, a graphic novel, or a video game, find a way to make it into one.

3.  Getting to the Con early on a Saturday is vital. Luckily, this crowd stays up late and 9:30 was sufficient( I imagine next year will be different).

4.  Choose your panels wisely and get to them early. Not all the rooms have space for everyone who waits in line. It’s also good to be in a space where you can actually see the speakers.

5.  The publishing industry is in flux and many of the old rules are dissolving but the ability to jump through flaming hoops is still one of the things that will make you a successful author.

6.  Expect pizza, french fries, soda, candy, and other common geek staples. If you want healthy food, eat before you get there or leave the venue for sustenance. I’m a recovering junk food addict (grew up in Hershey) who is now a Yogi. I scarfed a Galactic BLT that was mostly composed of  fry sauce on my way to a panel and paid for it for hours.

7.  The Con is much more than a cosplay event where you can get your picture taken with The Highlander and Hercules. It’s a networking arena for illustrators, video game developers, inkers, authors, filmmakers, special effects artists, clothing makers etc.. Think Outdoor Retailer for the fiction industry.

8.  Building an audience is the most important thing an author can do to promote their work.

9.  Everyone in this crowd is passionate about something, whether they’re in costume or not.

10.  If you have kids, make sure you have a plan for when you are separated from them. This crowd is like slow-moving lava and there are distractions everywhere. Most of the activity over the intercom was coordinating scattered parties. 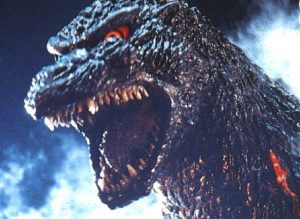 Today, Siri misunderstood me and searched for something that definitely shows up on the NSA’s radar. I asked it to search for a few different phrases without being understood before I ended up with “I-80 Construction in Utah”, trying to use the most simple phrase that could give me a phone number to get useful information from. Signs on the highway were extremely confusing and the Utah Commuterlink Website had been absolutely no help that morning. What did Siri search for? Nothing other than “IED Construction in Utah”. Fuck me. Excuse my language, but that’s what immediately came to mind after Siri had just performed a google search for “improvised explosive device construction in Utah” under my name. Talk about technology dependence becoming a problem…

I immediately imagined a string of events that ended up with me in some secret location being questioned as a threat to the country and trying to explain that Siri had done it. It was the one-armed man officer, I swear it… Fuck me… I’m in the middle of a Yoga teacher training weekend and have been driving back and forth between Park City and Salt lake City for the past few days. All I wanted was some useful information about the road I would have to use, and I likely just got myself added to some list that no one wants to be on. Hopefully their analytics are advanced enough to know that I then pulled over at a gas station and modified the search to it’s proper keywords so that I could call the UDOT Renovate I-80 Hotline I had been looking for in the first place.

Hopefully… Or maybe Siri just got me red flagged at the NSA. Who knows what that could do to me. I sure don’t. But, I can imagine. I wish I could have taken a screenshot of Siri generating the search, but I was driving. Hell, I wish I wouldn’t have been trying to use my phone at all. In a world where internet search terms are being sorted and analyzed for threats, you shouldn’t rely on a mostly helpful voice recognition software to do your searching for you. It may be a fluke, but it’s not one I’m going to risk repeating. Siri, we’re not speaking anymore.

It’s not that simple, though you’ll find plenty of articles with similar titles to this one.

Two weeks ago I resigned from a great job as a Product Manager so that I could guide my career back towards creating content and strategies for others to do the same. While I was managing the development of content production systems, writing user stories, and seeing features come to life, it wasn’t filling something in for me.

So I made a snap decision to quit my job after reading an article about how to do it…. Said No One, Ever.

I’ve been developing relationships with other freelance creatives and clients for over a year now, saving money, experimenting with different projects, and continuing to put 100% effort into my day job.  I’ve been weighing the pros and cons of going in either direction every day. Is it really worth it to pay for my own healthcare? Can I ever expect to make the salary I’m making now?  Is this really what I want to do? The road goes on forever. In the end, I decided that there were more positive possibilities than negative and that if I didn’t do it now I’d always regret it. I’m just barely getting started, but I did learn some things in making the decision that may be helpful.

1. Make sure you can pay the bills. Following your heart may require some slimming down and budgeting, but there has to be a demand for the career you choose to pursue and you’ll need some savings to get started.

2. Surround yourself with people who’s skills complement your own and who have similar goals. You’re going to need support.

3. Create clear goals and expectations. You need to have x amount of work, and x amount of money saved up by x date.

4. Roll with the punches. Not everything will work out exactly as planned. In fact, almost nothing ever does.

5. Learn from every person and experience. Especially the ones that frustrate, agitate, and annoy. You can’t afford not to.

Oh, and one more. Take care of yourself. Exercise, eat well, get massages, go out with friends. You’ll have to work your ass off almost all the time, but it won’t be worth it if you’re not taking a break to enjoy life.  Also, your eyes will burn out of your skull and you won’t be able to produce good work if you never relax.

I created something the other day. peopleofsundance.tumblr.com

The idea was sparked by fur boots over lunch at Whole Foods.

The intention was simply to create something relevant. It worked.

After a day, POS found @austendiamond, SLC City Weekly Music Editor, and he wanted to talk to me about it and write a blog post on it. I’m so happy that he did on many levels.  It got the some much needed attention and forced me to think harder about what this creation really was, because I still wasn’t sure. Thank you, Austen.

After spending last night on Main Street with all the glorious strangers and familiar faces, taking photos, dancing, and laughing,  I realized I needed to clear something up .

The site immediately triggers People of Walmart for many, and that’s a large part of the reason it spread so quickly. I don’t think Sundance is anything like Walmart, I just knew the name would resonate. This blog’s purpose isn’t to make fun of people it’s to give everyone a new way to interact with @Sundancefest. I don’t want anyone to feel bad about showing up on this blog. You can even find me on the site in a puffy blue jacket.

Sundance is unique and because of that, there are plenty of different perceptions around what it stands for. Whatever you think about it, if you aren’t having fun with it, you’re doing it wrong. Life gets a little strange at 7ooo ft., go with it. Wear whatever you want and own that shit because you look good.

Have fun with each other, take photos, send em in. Follow us @sundancepeople