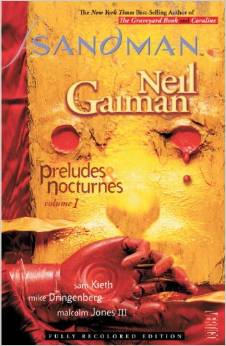 Spoiler Alert: Some plot detail is included in this review, but it won’t ruin the story for you.

These days, Neil Gaiman is famous for his novels and children’s stories. You might have read or watched Neverwhere, Stardust, American Gods, The Graveyard Book, or Coraline—but Gaiman’s first masterpiece was The Sandman. This graphic novel epic was released over 75 DC Comics issues from January 1989 to March 1996 and Vol. 1 includes the first 8. In Preludes & Nocturnes, you’ll find eight intertwining stories charged with myth, loaded with the infinite possibilities of dreams, and shaped by the dark tides of nightmares.

We meet Dream of the Endless in the era of World War One in the basement of a manor in Wych Cross, England. Captured in a ritual meant to imprison his sister, Death, the world loses its balance with the Prince of Dreams missing from his seat of power. People fall asleep never to wake again and others are driven mad when sleep refuses to come to them. He waits in silence for a lifetime as his captor grows old and dies while the artwork of Sam Keith, Mike Dringenberg, and Malcom Jones III, colored by Daniel Vozzo, and lettered by Todd Klein brings a vast new world to life.

Morpheus, Dream of the Endless, eventually frees himself  and must recover three objects of power that were stolen from him—a pouch of sand, his helm, and a ruby.  Morpheus calls on the three ladies, the Hecateae, to ask them where he can find his talismans. You’ll find these ladies throughout the series and they’re always a treat. Dream learns his objects are scattered across the mortal plane and one is in the possession of a demon in Hell. First, he meets John Constantine (yup, the DC character which the movie featuring Keanu Reeves is based off of) and bluffs his pouch from the grip of runaway nightmares.

After that, he steps out of the DC universe and travels to Hell to ask the help of Lucifer the Morningstar to find his helm. Here we meet Dream’s former love, Nada, who he cursed to hell 10,000 years ago for a reason left unknown in this volume. He greets Lucifer and is surprised to find a triumvirate ruling over the underworld. They call forth all the demons and Dream locates the one with his helm, but Choronzon, a Duke of Hell, received it in fair trade and Morpheus is forced to challenge him to a battle. It’s one of my favorite parts of the first volume and the page below is a taste. 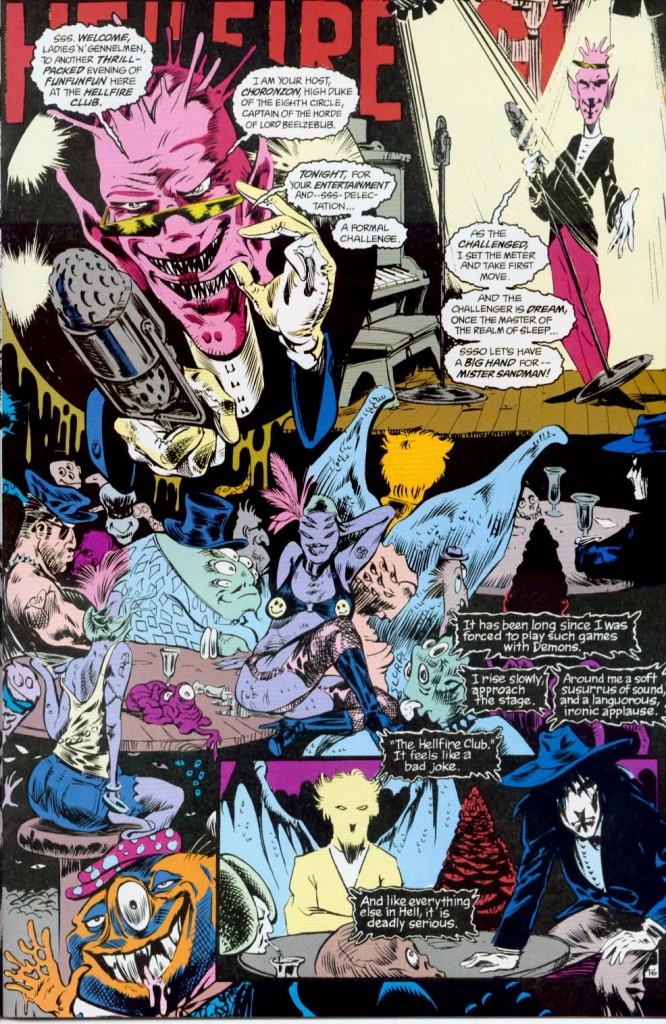 After the challenge, Gaiman takes Morpheus deep into the DC Comics world with both the familiar Arkham Asylum and the League of Justice playing a role in the story. He quickly leads the reader into the heart of nightmare with 24 Hours, likely the darkest issue in the whole series. In fact, this is one of the darkest corners of the imagination you’ll find in any story, ever. The villain in possession of Dream’s ruby uses it to convince a group of people in a 24-hour diner to dismember themselves and each other while a T.V. shows news highlights of a world going insane. You’ll find plenty of darkness in the rest of the series, but it’s more directed, purposeful, and somehow lighter.

Finally, with all his power back, a brooding Dream is cheered up by his older sister, Death, and Gaiman cracks into the voice for the rest of the series in The Sound of Her Wings. Dream follows Death as she collects departed souls and we get a peek at the inner workings of a family of beings more powerful than the gods.

Death has never been so easy to love and understand. 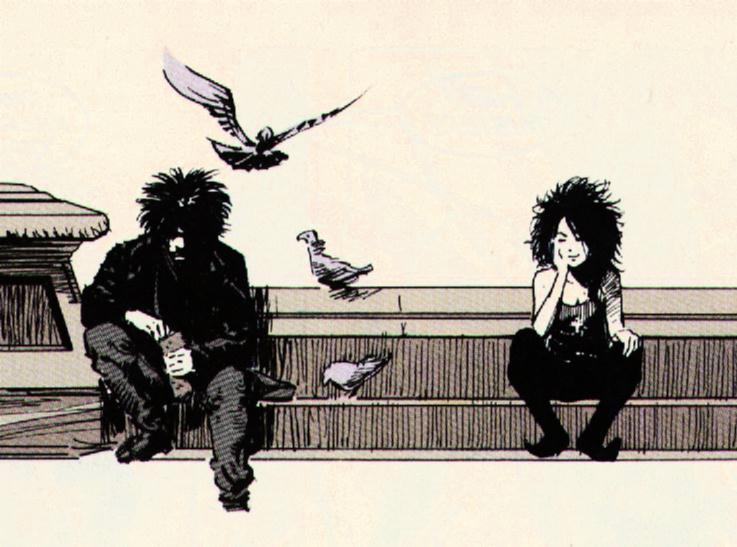 This is the beginning of one of favorite stories ever written. It’s a tale steeped in darkness—inspired by old fairy tales and myths. There are flashes of love, light, and redemption to be found throughout the series, but they’re given shape by the shadows. You don’t have to love the dark to enjoy this series, but you have to be willing to feel it squish between your toes.

If you’re intrigued, it’s worth buying the first 2-3 Volumes or the whole set right away,  so that you’re not stuck in suspense.