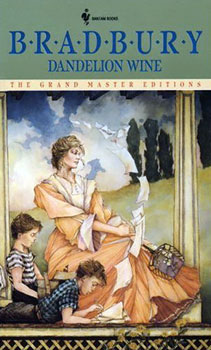 It’s fitting that I managed not to realize Ray Bradbury was dead until finishing Dandelion Wine for the first time the other night. Fitting because this gorgeous web of stories is about a boy who realizes he’s alive for the first time in the summer of 1928, only to realize that because of this great gift, we all must die.

Dandelion Wine exposes the fantastic possibility contained in “ordinary” life and transports you to another time and place. It’ll pull up ghosts from summers past and inspire something new in you at the same time. Whether you know Bradbury or not, his words have shaped corners of the world you live in and will continue to do so long after his death—and yours.

If you're alive, it's a must-read.

The summer opens with two young boys collecting grapes and berries in the woods with their father. They have tin pails and Douglas, the older of the two brothers, feels a looming presence in the woods. Something big. A primeval force coming toward him.

While his brother, Tom, is seemingly distracting Douglas from what’s approaching, they get into a fight and Douglas gets blindsided by the mysterious force—both of them ending up on the ground.

“And at last, slowly, afraid he would find nothing, Douglas opened one eye.

The world, like a great iris of an even more gigantic eye, which has also just opened and stretched out to encompass everything, stared back at him.

And he knew what it was that had leaped upon him to stay and would not run away now.

From there, the summer expands into a delicate fullness that runs away when you try to grab on to it. Fireflies and happiness machines, lost friends and deaths, soulmates, love, and ice cream—Bradbury leaves no stone unturned. Like life, his fantastic summer is captivated by the exquisite dance of tragedy and joy. The ebb and flow of what it is to be alive in all of the brightness and shadow in the world.

This book is a playful reminder to be present with the luminous beauty hiding in plain sight. It's all around you—even in the darkness.